Christian hate preachers in Germany? The dubious case of a hardliner

He is 53 years old, a hunter and a strength athlete, but Olaf Latzel is unfortunately also an evangelical pastor of the St.-Martini church municipality in the German city Bremen. Livestreams of his church services during times of the corona-crisis since February 2020 had up to 30000 clicks. He and his work are well liked not only in his own municipality. But fortunately, there is also much and harsh criticism against his preaching.

His style of sermonizing is, according to what I saw on his Youtube-Channel, very passionate. His sermons have a very dominant and commanding pitch, and when he talks against homosexuals and other religions, his emotions force his significant nasolabial wrinkles downwards to a grim face, and his eyes peer to the ceiling, when he emphasizes that we had one lord only, and he often shouts an almost hysteric „hallelujah“, when he subsequently continues with statements like „ein Knecht, ein Sklave, hat nur einen Herrn (a servant, a slave, has only one lord)“ and later „kein Knecht kann zwei Herren dienen…(no servant can serve two gods)“. He accordingly is strictly against mixed church services, wants Buddha statues or amulets in households to be destroyed and is such focused on details of ancient text details of the bible that female pastors in his church are not allowed to wear a talar (robe of an evangelical priest) or to preach from the pulpit. Homosexuals are welcome in his municipality only according to the principle „against sins, but for sinners“. Muslims can be treated with mercy, again only following the same principle. But I say: It is a sin to create sinners based o the natural diversity of life!

Apart from discriminating statements against Islam, Buddhism or homosexuals, the slave and servant idea is one of his main topics. According to his preaching, the believers represent nothing else than slaves or servants of god, who even paid for this slave service due to the blood of Jesus Christ. Olaf Latzel is a hardliner, and he does not try to hide this. But the distinct reduction of believers to slaves, to a herd of sheep in the full sense of this term, is also a very clever gambit against individualism, independent free thoughts and criticism. Stupid sheep are easy to control, they ask no critical questions, they even don’t express doubts about statements, written in a thousands of years old ancient book. But there is no god, who demands for thoughtless sheep, there are only very secular authorities in the disguise of religious leaders, who need sheep to fulfill their very secular motivations, namely to live a privileged life on the costs of their slavish subjects. If god preferred sheep instead of humans, he would have appeared as sheep among sheep.

Jesus Christ was the historical human being Jesus from Nazareth. He was an individualist with free thoughts and represented a critic of old and traditional religious attitudes. He considered the stupid human sheep in the Temple in Jerusalem his opponents, and his major aim was to teach and practice charity. His followers were women, who he met as equals, and unmarried men with unknown erotic preferences  (Who knows, may be some considered themselves even as non-binaries!). The disciples of Jesus from Nazareth had a subversive and creative power to modernize the communities, they did not look back to their ancient past, but instead invested their energy in a more human future (at least originally). They today would not find any of their ideals in municipalities with Christian hate preachers. 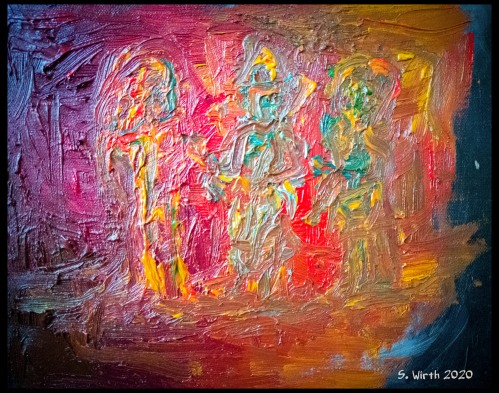 Jesus meets two strangers in an evening twilight scenery, a man and a woman, on an equal level. Both strangers are proud of being free thinkers, the man might even be gay, we don’t know. Oil on canvas, Berlin May 2020, copyrights Stefan F. Wirth.