It’s a new approach to photography for a photohrapher, when using a drone. Before starting for the flight, the photographer should at least have an idea about the possible perspectives, from which his copter shall capture the photos. This requires the ability of a three dimensional imagination. Unlike in the regular photography, the drone pilot does not see the scenery with his own eyes. Only a stepwise experience allows him to guess, how a forest and meadow landscape might look in a bird perspective at a level of 50 or even 100 m.

But despite of all three dimensional imagination abilities and experiences, much photography or videography is based on spontaneous shooting reactions, based on the transmitted live picture.

.
If full automatic camera modi shall be avoided, manual presettings can already be made before starting the flight according to the general light conditions, finer adjustments can then follow in each specific case, when the drone is in the air.

An aerial photographer needs to resist to the danger of perceiving the environment in top-down view after some time with the drone camera only. The German laws define that a drone is only allowed to be flown in a distance of a direct visual contact. One reason is that one otherwise losses the feeling for a safe controllable space limit.

Before drones as flying cameras became commercially available for everybody, aerial photos or videos needed to be captured under more risky and also more costly conditions. Smaller planes, manned helicopters or cameras on balloons needed to take over the same function.

Being able to fly like a bird under remote control conditions is freedom for the spirit and at the same time freedom for an incredible creative flexibility.

All aspects of our world deserve being considered as drone photography motifs (respecting laws of course) . Whether a settling, a city, a street construction, people, architecture or nature sceneries, the drone technology enables new options and aesthetic experiences. I made experiences in different photo object types (the respectation of laws has always a priority). But for my own projects I prefer landscape, weather, season and art photography. 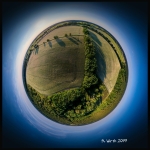 .
Flying in more or less remote areas with natural landscapes reduces the probability that a drone accident might harm people or architecture. But it is of course additionally important to bring no animals or plants in danger.

Landscape photos are the more interesting the more complex their composition is. But a forest with adjacent meadows is per se no guarantor for an impressive photographic piece of art.

.
Only the contrasts of colors, shapes and different landscape elements can under optimal conditions create complexity and a fulfilling picture composition. More or less sharp edges between for example forest areas and adjacent meadows might built up an impressive and even seemingly abstract pattern, making the shot to a fascinating piece of art.

City structures, such as architecture, streets or walkways, seem not to underlay bigger seasonal changes (in times withoug snow or rain) . Is that true? It of course is not, the seasonal different light conditions always cause different photographic or videovraphic looks of the same location. The lack of intense green or colorful vegetation spots in between creates additionally sceneries with very different moods.

Of course the effect of different seasons is especially distinct in the nature photography. Even in case that black and white photos would be preferred, leafless trees of a winter forest usually look remarkably more interesting than an amorphic mass of grey leaves. In the colored drone photography, nobody would doubt that the diversity of autumn colors allows a much more impressive composition of structures, shapes and lights.

But also in summer or spring, when only slightly differing green nuances dominate the sceneries, eye catching drone photography can be performed. 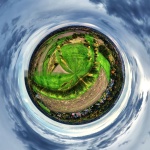 .
In case the greenish landscape sculpture itself does not allow a photographic highlight, then a dynamic sky can prevent the whole photo from getting lost in a boring piece of sadness.

One needs to keep in mind that a positioning of the drone camera with being for a longer time straightly directed into the sun might harm the camera sensor. Against the light photography can look stirring, but it’s often of advantage to avoid the sun body itself completely. Against the light photos usually lead to dark landscape elements in the foreground, almost consisting of silhouettes only. To receive more details on the photo it is recommended to record a higher amount of information. Raw files can be the best choice in this context, as they allow to develop details during editing, which were not visible before.

To become able for an improving editing of a photo, a minimum resolution of details should be available. A resolution of 20 megapixles or more offers enough buffer for art filters or manual changes of light, color, contrast etc. The Mavic 2 Zoom for example unlike its sibling brother Mavic 2 pro with a high quality 20 megapixles camera, offers different panorama modes. One of them is created as composition of several 12 megapixle photos, which the camera automatically puts together to a 45 megapixle piece. In case drone cameras allow a raw mode and additionally a high resolution, both of these options should be chosen.

.
Editing can have different functions combined with different intentions of the photographer. An almost perfect photo sometimes needs being only slightly digitally improved. Alternatively the entire photo might need to be stronger modified for aestethic and creative reasons to create the planned piece of art. The creativity of the photographer and editor at this has no limits, but it should be tried to avoid the ‚killing‘ of too much picture information.

Not every editing tool has a modern high quality level. Lightroom, Photoshop, pixlr and similar software of other developers must be recommended.

I have more than three years of experience in the fields of drone photography and drone videography. I herewith offer my videographic dronepilot service for documentary projects, smaller movie projects, such as film – students- projects, image movie purposes or the videographic documentation of important private events, such as marriages.

I additionally offer my drone photography abilities for all kinds of fields and purposes. Preferably in and around Berlin. Please contact me via Instagram or Facebook ‚Stefan F. Wirth‘. I fly a Mavic 2 Zoom. Flying license (Kenntnisnachweis) and insurance for commercial Drone flights existant. 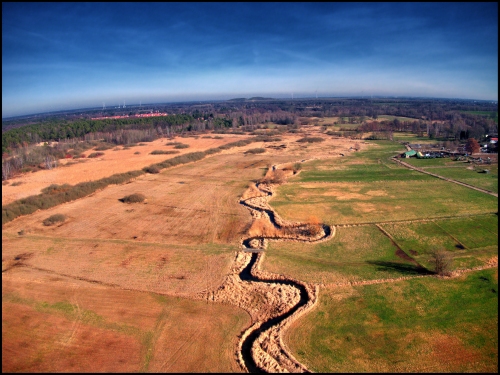 Berlin as a green city

Berlin is an unusually green metropolis. Besides numerous urban park landscapes and the huge forest area Grunewald, there is a unique countryside north of Berlin, including the area of the old village Lübars, being surrounded by numerous fields (Lübarser Felder) and a stream pasture landscape, named Tegeler Fließ, with bog meadows.

In the northeast, around the urban village Blankenfelde, the currently highest elevation of Berlin can be found, the Arkenberge. Originally, they represented a chain of smaller mounts as natural remnants of the Weichselian glacier. One of these mounts is especially conspicuous and is acually prepared to become accessible for people and forms with a height of 122 m over NHN the highest mountain of Berlin. It represents despite of its natural origin a rubble landfill site, which was formed beginning in 1984.
Adjacent to the Arkenberge, several wetland areas attract nature enthusiasts for hiking tours: the pond landscape „Schönerlinder Teiche“ (Brandenburg) and the lake Kiessee Arkenberge.

The stream Tegeler Fließ is a wetland nature site with a high biodiversity of plants and animals. It is surrounded by different types of bog meadows. The Tegeler Fließ lowland is also a result of the last glacier period.

The stream lowland is additionally adjacent to a calcareous tufa area, which is well visible from top of the Arkenberge. Calcareous springs and calcareous tufas created here calcareous rush- marshes with an interesting biodiversity of for example species of mosses and snails.

The footage was captured from localities around the village Lübars in the area of Lübarser Felder and additionally around Arkenberge. Some above mentioned nature sites are only visible in a distance.

Migration stop Linum for cranes and geese, inflight of the cranes towards their night quarters

The area around the village Linum (Fehrbellin, Brandenburg, Germany) is famous as a bird refuge, in summer for storks (Ciconia ciconia), whereas in autumn cranes (Grus grus) and greylag geese (Anser anser) use the numerous wetlands as night quarters during their migration stop towards the Southern hemisphere. Many cornfields around offer enough nutrients, which the birds need in order to successsfully perform their long ways southwards. Besides these most conspicuous birds, also other species, such as common starlings (Sturnus vulgaris), stay for a while in that ecologically complex bird refuge.

The common crane uses diferent routes with different destinations, depending from where the groups started. Birds from Central Europe and Scandinavia (meanwhile often also from the Baltic region: Finland and Belarus) take the Western European route towards France and Spain, and more rarely North Africa. Details of that route can differ and are still topic of scientific evaluations. This is why organisations, such as NABU, ask people to forward observations about flying cranes to them.

The crane formations differ from those in greylag geese. G. grus flies in wedge-shaped arrangements, unequal angels or diagonal rows, all in order to reduce the air resistance and nevertheless having a close contact between bird specimens.

Climatic changes obviously influence the migration behaviors, for example of cranes. In that context, it was observed that they tend to return earlier back to their summer quarters in the North due to a warmer climate.

My footage was recorded on 13 and 14 October 2018. This week-end was considered unusually warm for the season autumn. With about 26°C during day time, these days must be formally named summer days.

In October, cranes usually begin between 17:00 and 17:30 with their impressive flights back to their night quarters at the waterside around ponds and lakes. Due to the intense sunlight and warmth on these days, in which I visited Linum, the spectacle differed a bit from the impressions, which I had during my visits in former years.

Cranes and geese covered the sky in greater numbers at the same time. I formerly didn’t observe so many geese in the air during the in-flights of the cranes. While cranes strictly were flying towards the watery areas of Linum, geese flew in all directions. Additionally may be due to the high temperature even in the evening, some crane groups seemed to feel comfortable feeding on cornfields close to the main street still after 18:00.